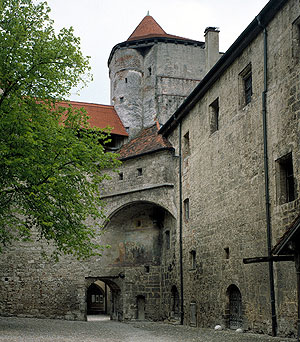 The castle courtyard was a particularly secure area for the facilities accommodated in the innermost castle area: the living quarters of the ruling couple and their immediate court in the Palas and Bower, the dining room for the duke’s followers and servants in the Knights‘ Hall and the stores and maintenance rooms on the ground floor or cellar vaults such as the food stores in the Palas and the wine cellar in the Knights’ Hall.

Although the architecture is very simple, the courtyard creates a fascinating impression with its high walls of well-cut, regularly offset tuff ashlars towering above the confined space at the end of the narrow ridge like the sides of a gorge.

The arrangement of the complex and the irregular ground plan of the buildings was dictated by the site. Nevertheless, in the original castle built under Heinrich XIII, the Knights’ Hall and the Bower were symmetrically opposite one another. At the time of Heinrich XIII, the surface of the courtyard was around half a metre lower down, which explains the very low level of the ground-floor rooms. 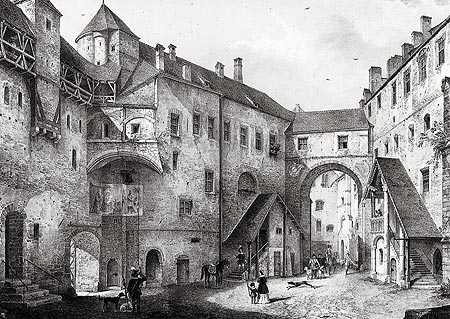 The Rich Dukes are traditionally said to have kept their state treasure in the old Romanesque keep, which fell down in 1482. In 1484 Georg der Reiche (Georg the Rich) had a building constructed adjoining the southern, narrow side of the Knights’ Hall, which consisted of a single room with reticulated vaulting, barred windows and a heavy door with iron fittings. This evidently served as the new treasury. The year it was built is recorded in the stone above the entrance.

The 1573 description of the castle would seem to confirm the purpose of this vault, stating that “a long time ago the silver statuettes“ were kept here, possibly the forfeited treasures of Ludwig der Gebartete (Ludwig the Bearded), from the French Crown Jewels, which were part of the Burghausen treasure and included seven statuettes of saints, most of them gold and decorated with precious stones, and two similar pictures of the Virgin Mary. 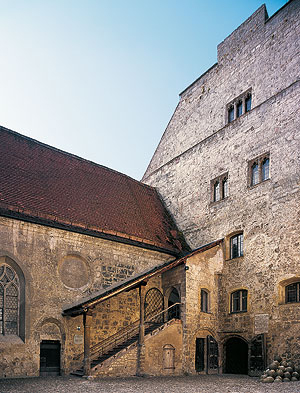 Palas and Castle Chapel; beneath the
open stairway the narrow "prison door"

Beneath the landing of the open stairway that leads to the living quarters in the Palas is a wedge-shaped vaulted room, inserted between the chapel and the Palas and lit only by a slit window which tapers outwards and is secured with three bars. It is not possible to say for certain whether this vault was really used as a prison, and in the 1573 description of the castle it is referred to as a kitchen.

The conclusion that it was a prison was drawn from the inscription in Gothic minuscule two metres up in the mortar of the wall with the words: »bey Dir mein trew Wolfgang von pienznav ritt /M«. This inscription is interpreted as a dedication by the imprisoned Duke Ludwig der Gebartete von Bayern-Ingolstadt to the faithful Wolfgang Pienzenauer, who was in his service at the Ingolstadt court.

Ludwig der Gebartete was imprisoned in Burghausen castle by his cousin and arch enemy Heinrich der Reiche (Heinrich the Rich) from 1 September 1446 until his death on 2 May 1447, but it is very doubtful whether it was in this cell. As is recorded in various documents, the duke who had been deprived of his powers had a certain freedom of movement within the castle walls. After his death he was buried like other residents of Burghausen Castle in the monastery church of Raitenhaslach.